Peccadillo and picadillo. One a minor fault, the other a major yum. Guess which one we’re talking about today?!

Picadillo, the major yum, is generally considered to have originated from Spain and Latin America, but nearly every culture has something like it. Building on the familiar base of sofrito—garlic, onions, tomatoes, and vegetable oil—picadillo veers into Latin territory with the addition of Sazon seasoning, which is a spice blend of cumin, coriander, and several other ingredients.

Typically, picadillo is made with ground meat. So, how to veganize it?

I thought about replacing the meat with a soy substitute, but adding a pound of tempeh seemed like a bit much. Plus, then the texture wouldn’t be right. One thing I like about picadillo is the way all of the ingredients meld together, and I wouldn’t say tempeh ever really melds…

Then I noticed recently when I roasted an eggplant how soft it became. Eggplant works well with other nightshades, and since it doesn’t have a strong flavor, I figured it would absorb the seasonings nicely. Does it ever!

Other highlights of this dish are olives, capers, and raisins. Yes, raisins! After simmering for an afternoon you can barely spot them in the stew, but they impart a surprise sweetness that balances the intensity of this dish nicely. The olives and capers lend saltiness and depth, which highlights the acidity of the tomatoes.

This picadillo is incredibly flavorful, and unusual but familiar at the same time. The recipe also makes a large quantity, so it’s a good dish for company. Just make sure you keep some leftovers—picadillo is even better the second day.

Ways to serve your picadillo: 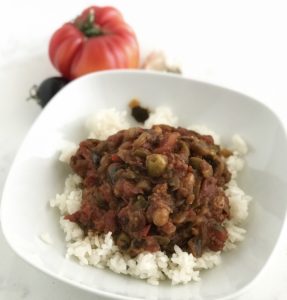 For the coconut rice: