The first time I tried to make my own granola I burned the hell out of it, which hurts a little when it’s loaded with gorgeous (and not inexpensive) superfoods. Fortunately, it was immediately evident what I needed to do differently: add the fruit last. Apparently, dried fruit is a bit more vulnerable to burning than rolled oats. [These are the kinds of things I would learn if I ever read a cookbook, but I dislike imposed rules (like recipes) so much that I. just. can’t. So…live and learn.]

Despite adding a couple steps to my initial recipe, this granola is still so easy to make. It’s super nutritious and satisfying and can be served a number of ways: straight up, as a cereal, in a parfait, or as a garnish for a dessert or even a salad. Three cheers for versatility! 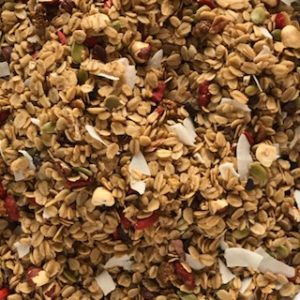