“Spirituality is the way we sense the sacred depth and dimension in all things. It is our creative, intuitive, and pragmatic response to the unreachable and infinite mystery of our living experience.”

Any idea who said this?

It wasn’t a famous yoga teacher, prominent psychonaut, or celebrated Buddhist monk. It was a Christian pastor from Bothell, Washington, who you may or may not have ever heard of.

I first learned about Ryan Meeks from an Upworthy story I saw on Facebook. The accompanying video detailed Ryan’s decision as Head Pastor of Eastlake Community Church to publicly affirm the LGBTQA community. It was a courageous position to take, and a break from evangelical doctrine. Traditionally, churches—at best—look the other way. In some cases, homosexuals are condemned outright.

Ryan’s decision to affirm the LGBTQA community cost his church thousands of followers and millions of dollars. Unsure of whether or not they’d be able to pay their staff or electric bill, he didn’t back down. Instead, he doubled down on his resolve to offer a more just and generous Christianity.

You know how church is supposed to be a place of compassion, forgiveness, and service? Yet it often feels judgmental, dogmatic, and rote? With the support of his staff, Ryan Meeks is changing that and challenging the norm. 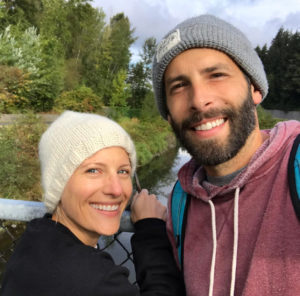 Ryan and his wife, Michelle.

Ryan recently had his own faith tested when he was diagnosed with Stage 2 Hodgkin’s lymphoma, for which he spent the better part of the past year undergoing treatment. The experience seems to have crystalized Ryan’s commitment to this truth-seeking adventure most of us just call life. He recently received the all-clear that his cancer treatment was successful, and he is regaining his strength.

When I asked Ryan where he imagined he would be in 25 years, he didn’t say he hoped to be running a mega-church à la Joel Osteen. He didn’t say he hoped he’d have a following the size of Oprah’s. He said he’d be married to his wife—who is his high school sweetheart and best friend—and living with the same curiosity, openness, and commitment to love in action that he is today.

For our sake—yours and mine—I hope he is still teaching. Because regardless of religious tradition or belief, what Ryan teaches is authentic, tested, and true. He teaches a lesson many people don’t realize until their dying breath. Imagine how our lives—and the world—would change if we simply learned to live by his mantra:

Life is a gift, and love is the point.

Listen to our interview here:

For more information, go to eastlakecc.com.