Inspiring people offer their perspective on what it means to Eat Like a Yogi, and how we can all better serve the planet and each other.

“The whole planet is going to evolve toward vegetarianism and veganism, whether we want to or not. That’s just how it’s gonna go down. I can see that.” 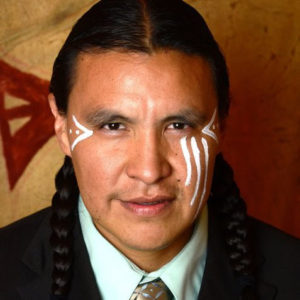 Chase Iron Eyes is an American Indian activist, attorney, politician, and a member of the Standing Rock Sioux Tribe. He is a member of the Lakota People’s Law Project and a co-founder of the Native American news website Last Real Indians. In April 2016 he announced his candidacy for the United States House of Representatives for North Dakota’s at-large congressional district. He was unsuccessful.

Last August I had the opportunity to meet Chase Iron Eyes at the Beloved Festival in Tidewater, OR. Neither of us were prepared for the nearly hour-long conversation that stemmed from our meeting. I was familiar with his work from following the Standing Rock protests, but I’m quite certain he had never heard of Eat Like a Yogi before I surprised him with my interview request. Lucky for me, he was game to do it, even on the spur of the moment. The conversation that followed was wonderful and rich, something like a walk in the woods on a summer day—a little wandering, over varied terrain, leading to the extraordinary interconnectedness of the whole of life.

One of my favorite parts of the following interview is when Chase outlined suggestions for how we canall stay connected to the source and spirit of our food. These ideas are simple, accessible, and so relevant in these busy times:

Here’s a pared down version of our conversation, which includes some background music and ambient noise—we were sitting in the middle of a festival, after all. I’d love to hear what you think—let me know on our Instagram feed.