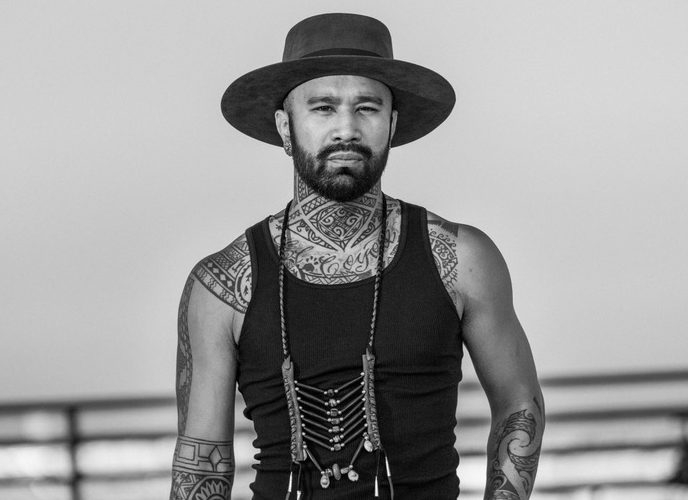 “Our friends come on the tour bus and are like, ‘Dang, it’s all healthy stuff!’ And we’re like, ‘Well yeah!’ I mean…that’s the only way to be.” 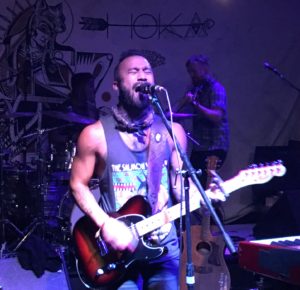 Nahko Bear, an Oregon native whose ancestry includes Puerto Rican, Native American, and Filipino bloodlines, considers himself a citizen in service to the planet. Disillusioned by the world around him and inspired by vagabond, Americana musicians and storytellers like Conner Oberst and Bob Dylan, Nahko left home as a teenager in search of adventure and self-discovery. Armed with stories, a guitar, and a fierce set of ideals, he set out to bridge the cultural gaps dividing his own psyche. He began producing a public, musical journal of his journey toward personal, spiritual, and social healing, and thus Medicine for the People was born.

Only a few bands have captured my heart and soul in the same way as Nahko and Medicine for the People. Their unusual instrumental mix—which includes a violin and flugelhorn—pairs with Nahko’s evocative poetry to create a sound that ranges from contemplative lullaby to shit-kicking, barn-storming call to action. This dichotomy is understandable given his unique origin story: Nahko was conceived when his mother was raped, then adopted as an infant and raised by white, conservative Christian parents. It appears this is all fuel for his fire—there is no subject Nahko shies from as he considers the past, present, and his place all of it. From San Quentin State Prison to the cliffs of Hawaii, from his lover’s bed to the prairies at Standing Rock, Nahko’s lyrics are heartfelt, passionate, and inspiring.

Nahko and Medicine for the People’s music truly is a panacea for the social and political fuckery in the world today. They don’t just sing about it; collectively the band supports a number of causes, including salmon restoration, Intertribal Youth programs, and opposition to the Keystone Pipeline.

Recently I had the chance to sit down with Nahko before his sold out show at Marymoor Park. It was, to be honest, the first time I felt intimidated by an interview. I needn’t have stressed, however. Maybe it’s our shared astrology—we’re both off-beat Aquarians—but the connection was natural. Nahko was warm and easy to talk to. I particularly appreciated what he said about measuring change and his thoughts on songwriting. We also covered staying healthy on the road, receiving guidance from unexpected places, and serving the greater good.

The Q&A below is abridged from the MP3 file that follows. If you have 20 minutes, you’ll want to listen to the whole thing (especially the part where we have a funny mix-up about sex). Enjoy!

Q: Besides music, what’s your medicine when you’re on the road?

A: We are really lucky to have a good crew of guys that all eat super healthy. None of us are vegan but we have a couple vegetarians. Our horn player is our shop mama, and he knows what we want to eat, so at every stop he goes and shops for us. We usually have a really good selection of stuff. Our friends come on the bus and are like, “Dang, it’s all healthy stuff on here!” And we’re like, “Well yeah!” I mean…that’s the only way to be. We also get spring water wherever we go. And we’re on each other’s case about taking vitamins and stuff.

Q: Do you have a movement practice?

A: Movement-wise, I like to run. And (guitarist) Chase and (violinist) Tim sometimes lead us in some yoga…we all do our own stretching but don’t always do it together. But most of us are surfers so we’re always keeping an eye out for that.

A: As a yogi you can set an example. Especially if you’re a parent, or you can be an example for friends who think yoga is some hippie thing. You’re showing them by not only in how you live and how you look, but especially for kids, starting them at a young age and showing them that it’s not weird or lame but that yoga is fun and will help them feel good. I think setting an example is a pretty important piece of the puzzle.

Q: As someone who is a change agent…how do you measure change?

A: In my spirit mind I think, “is it necessary to measure it?” When I take myself outside myself…it’s such a human thing to want to know the results of things and to need to know “have I done something that is showing a result?” But when I think how I feel about it, about my own stuff…you go through chapters and transformations in life. Am I still doing the same things I used to do? Patterns are okay, keeping track of what those patterns are and if they’re serving me. But we spend so much time thinking about those things…it’s a balancing act of whether you’re overthinking things or not thinking enough.

As for measuring change on the scale of what we do, it’s immeasurable. There’s countless experiences and daily moments that I see transformation happening as a result of the music and as a result of the life we chose to live in an industry that is so stubborn to change.

Q: You mentioned the life we choose to live…you didn’t exactly choose this life. How did you get here?

A: I started out in my car with my dog Koda. Touring wasn’t even a word, we were just cruising and exploring the States with whatever cash I had, playing at farmers markets and coffee shops.

Q: When did you know this was a thing?

A: Aloha Ke Akua came out in 2012 and someone made a video for it that went viral. We started getting all these messages from all around the world. I was like, “Whoa, this is something.” I didn’t know anything about the music industry, so I didn’t know what I was getting myself into. I was farming before that!

Q: Is that where the horses come in?

A: Yeah, I had four horses in Hawaii when I was living there full time. There’s nothing that will get you closer to understanding how to relate to animals—or humans—than working with horses. Because they’re just enough human in how they communicate with you and just enough wild to help you find the balance between your human mind and your mind that understands nature and doesn’t need words, that communicates with actions and your vibe. It requires a lot of patience.

Would you call horse a spirit animal for you?

A: I guess so, yeah. I have a lot of spirit animals. Coyotes are one—I love coyotes—and hummingbirds, dragonflies, the creatures that show up in the most appropriate time. Like there was this spider once when I was very deep in with some medicine in Lassen National Park—that’s a super dope national park south of Shasta. I was doing pushups on this rock in the sun on this river and there was a spider there. And I was trying to make this record and asked, “do I do it?” And he’s like “yeah, do it! Get it out there, they need it.”

But the artist’s mind, you just go back and forth with so much stuff all the time.

Q: Speaking of that, I read that you think you put too much into songs?

A: Well, you know, there’s a practice of understanding when the story is done. I think that previously I’ve thought, “am I done with this story?” And it wasn’t done. It’s a tricky thing to let the listener in, but you need the puzzle pieces to have a format. The songs on the next record are still fairly lengthy, though there are some shorter ones where I could finish the thought in three minutes.

Q: What does it mean to you to Eat Like a Yogi?

A: To eat holistically, and well-rounded. To be slow about it. Also, to live in prayer in that way. To do everything you do with prayer…to do it in a good way.

Q: Speaking of the Eat Like a Yogi Manifesto…which item stands out to you as being most relevant today?

A: We are in this together…no man or woman is an island. One of my best friends used to say to me “Be an ocean. You can hold all the things.” When you’re an island, you cut yourself off from the way that the rest of creation can nurture and care for you. Not that we’re hating on islands, because we like islands. But the metaphor is speaking…be an ocean, be with all things and touch all things with your waters. And don’t short yourself or cut yourself off from what nature and creation has to give you. When you find yourself being an island, let someone help you.

Q: When’s the last time you asked for help?

A: Probably earlier today…when I got my fingernails painted.

Q: What causes are you most excited about right now?

Q: Check out the Winnemum Wintu website…it’s a salmon restoration project we’ve been working on for awhile. I’ve been working with a tribe there to restore the salmon to the rivers; they’ve become so depleted. We’re trying to get a waterway built around the Shasta dam so the salmon can go home. Check out Run for Salmon, and also our salmon documentary that we made, which is on our Facebook site.

There’s also a ride against the flow of the Keystone Pipeline and we’re working on that as well. More information on that is at honorearth.org .

Listen to the audio of the interview here.